Ingehim offers our own in-house mobile pulsating units (MPU) (Russian patent No. 2555718) intended to treat oil wells with the aim of increasing their productivity and implementing a fundamentally new pulsating (hydro-impulse) method of impact of the working liquid on the well in a sparing (pressure at the wellhead up to 80 atm.), structure-saving mode with no downhole devices. Pulsating treatment is performed during the period of current or capital repair of wells by creating low-frequency (0.02–0.001 Hz) pressure pulses at the wellhead in combination with alternating changes in the direction of liquid flow in oil-well tubing and annular space at speeds of up to 2.8 m/s and flowrates up to 50 m3/h.

Advantages of the developed pulsating technology with respect to the current pulse technologies:

High efficiency of MPU is due to the following effects:

1. Forced cyclic non-stationary mode of impact on the treatment zone.
2. Emergence of the effects of “ebullition” of the working liquid, separation of the gas phase and destruction of the near-wall layer.
3. Formation of a steady depression in the bottomhole zone, which contributes to the decolmation of contaminated zones, unblocking of the overflows and opening of the pores.
4. Restoration of filtration capacity and stabilization of hydraulic conductivity of the bottomhole and near-wellbore zones. 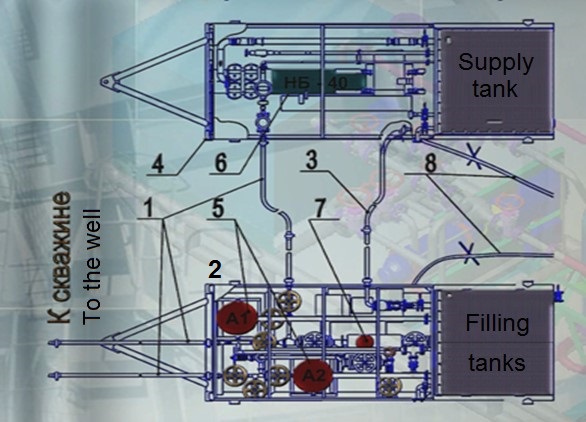 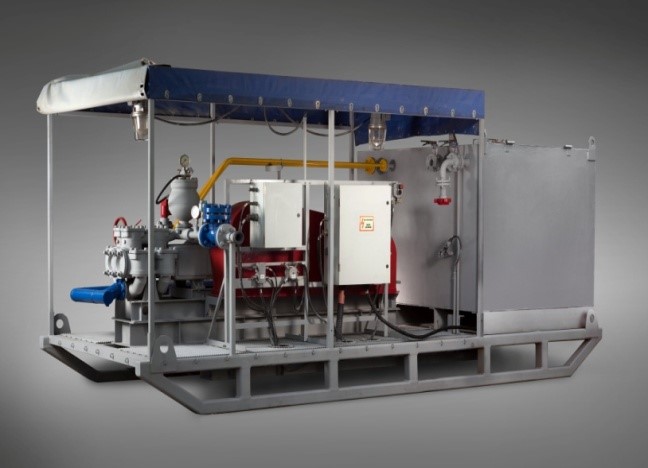 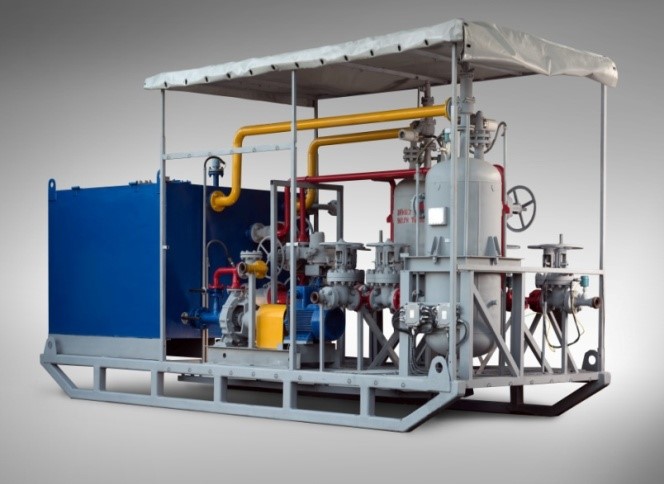 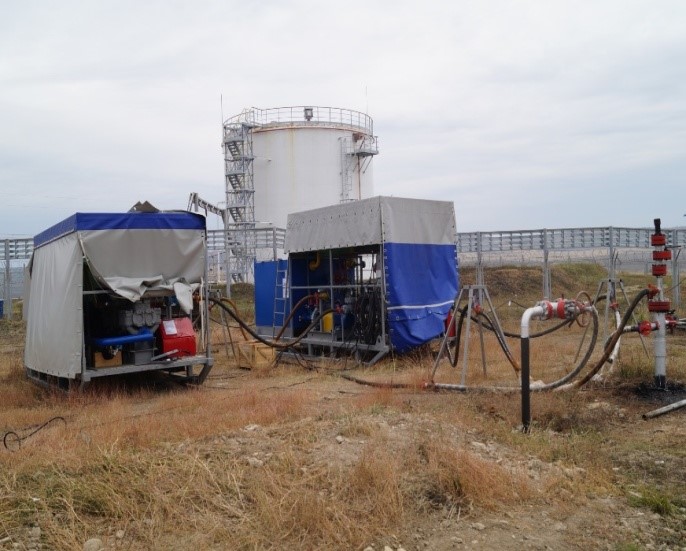 MPU in the oil field

– Discharge capacity: 20–50 m3/h.
– Operating/maximum wellhead pressure: 63/80 atm.
– Working liquid: process and reservoir water, water-oil emulsion, oil, surfactant solutions, non-aggressive reagents, etc.
– Structural embodiment*: block-modular, skid-mounted.
– Material: standard, corrosion resistant, stable to aggressive media.
– Overall dimensions (length/width/height): 5.8/2.2/2.55 m.
– Total electrical power: up to 100 kW.
– Weight of one block of the unit: no more than 8 tons.
*Manufacture of MPU is possible upon agreement with the Customer in the following variants:
– on the chassis of a truck, driven by a power take-off shaft;
– on a skid with an electric or autonomous drive;
– stationary variant with an electric or autonomous drive.

MPU allows one to independently implement all the necessary technological operations related to complex pulsating treatment (considered to be the most efficient) consisting of several types of sequential or alternating treatments in a single well or in a well cluster. To increase the efficiency, pulsating treatments can be combined with chemical, thermal and other methods of impact. MPU can be used to treat existing injection and producing wells, including marginal wells, wells with varying designation (converted wells) as well as an oil well cluster.

Types of pulsating treatments possible with the use of MPU are determined individually for each well or well cluster. MPU allows one to perform the following types of treatments:

– Pulsating mode of treatment of the bottomhole zone.
It is used to intensify water treatment as well as all types of reagent treatments in the well bottomhole zone due to regular non-stationary turbulent hydrodynamic effects.

– Pulsating mode of treatment with ducting.
It ensures simultaneous treatment of the bottomhole zone and lift of contamination products to the well mouth without using any supplementary special equipment.

– Pulsating mode of flooding of the injection well.
It restores the filtration capacity of the bottomhole zone, maintains its hydraulic conductivity by providing an increase in water flooding amounts.

The layout of MPU depends on the list of types of performed pulsating well treatments, level of automation, variant of MPU as well as some other factors.

Declarations of conformity with the Technical Regulations of the Customs Union were granted to MPU units.

To order our MPU units, please, provide us with initial data for designing as well as all requirement specifications for the MPU units through e-mail.

Workability of MPU and efficiency of the pulsating treatment of oil wells were confirmed by the results of pilot tests carried out at 9 oil wells of the fields of the Republic of Tatarstan, Russia. A positive effect during tests of MPU for the pulsating treatment of the wells was achieved through only the hydrodynamic impact by the reservoir water without any reagents, supplementary downhole devices or special equipment.

Results of the pilot testing of MPU for the injection wells confirmed the following:

1. Stable performance of MPU for all specified technological modes.

2. Lift of up to 10 m3 of oil-containing “sludge” to the well mouth during pulsating washing.

3. The downhole pressure gauge confirmed the modes of periodic pressure changes in the well and recorded a steady depression, which corresponds to the calculated values. 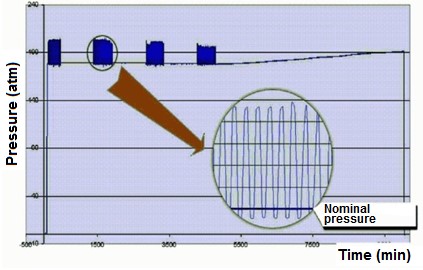 4. Based on the comparison of the well logging data before the start of repair and after the pulsating treatment, the following effects were recorded:

– cleaning of the sump from deposits with preservation of the downhole layout during treatment;

– opening of non-working perforation intervals and an increase by more than 50% in the working zone of the perforation after pulsating treatment compared to the initial working zone;

– change of the injectivity profile, redistribution of injectivity into a given perforation interval with its increase to 45% from the initial value;

– increase in injectivity of the injection well by a factor of 3 to 5 from the initial value (from 84 m3/day to 384 m3/day) during conducting the pilot tests without using any reagents.

The figure below depicts the decoding of the controller records of the change in performance during the pulsating treatment of the bottomhole zone of the injection well at a discharge pressure of 66–75 atm. The graph clearly shows the dynamics of an increase in the flowrate of a liquid injected into the well during the discharge pulse, and a sharp drop in the total volume of liquid in the MPU tanks. In the course of pulsating treatment of the bottomhole zone, the injectivity of the well increases and the discharge pressure decreases.

5. Positive dynamics of growth of the injectivity coefficient Kinj during pulsating treatment and its increase by 5.4 times, which is confirmed by the following graph: 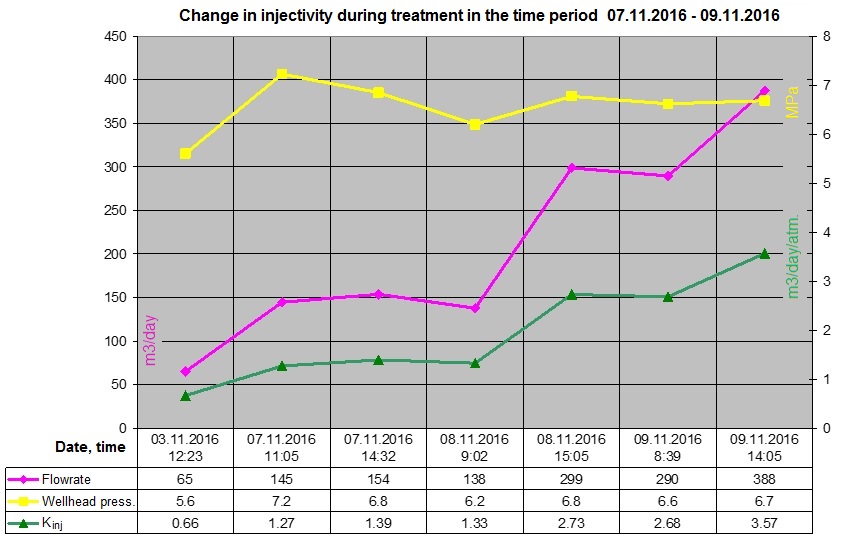 7. During pulsating treatment, decolmation of the bottomhole zone occurs; its filtration capacity is restored; hydraulic conductivity (permeability) is stabilized.

A characteristic response of the wells to the pulsating impact, positive dynamics of changes in operational parameters during the treatment, resulting significant effects in the reservoir’s productive zone, influence of elastic forces of the pulsations on the near-wellbore and bottomhole zones of the reservoir determine efficiency of the pulsating method in improving reagent technologies of treatment of the producing and injection oil wells.